After a week of cruising Alaska (Part 1), we said farewell to Jared, who headed back to San Diego.  I snagged the cutest little three year old I could find and we boarded a train from Whittier to Denali.

The train was so cool!  We were on the second level, surrounded by windows, and scenery.  AND Uncle Rhino surprised Liv with a marshmallow he’d smuggled from the salmon bake in Juneau!

It was a long ride and I felt a little trainsick, again (is that a thing?), but we played games, snacked, and enjoyed the views.  We even got to see a moose! 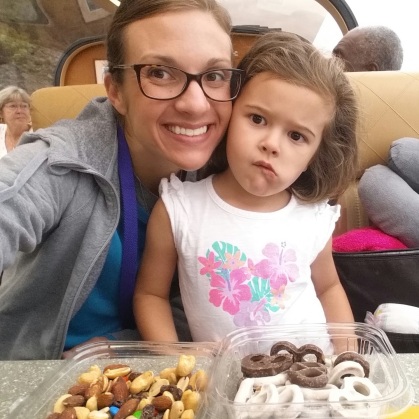 When we finally arrived in Denali, Liv was excited to test out the “jumpiness” of the beds (of course), before we headed to a dinner theater.  The food was great, but Liv was overtired, and we didn’t make it through the performance before I had to carry her back to our room. 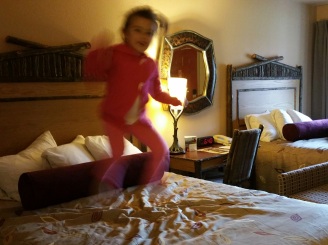 After a week of fancy lobster dinners and extravagant cruise life, the Denali Lodge felt rustic and woodsy, but the grounds were beautiful. 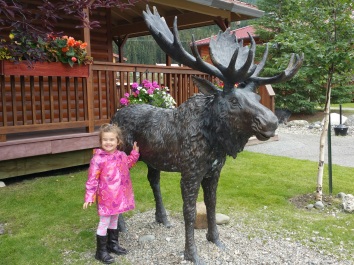 We went on a natural history tour of Denali, where Liv fell asleep on my lap, but not before we saw a caribou!! 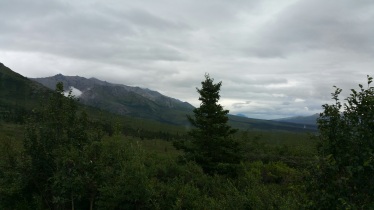 We saw and learned so much on the tour, but the highlight was definitely our tour guide, Phil, who casually told us about how he’d gone for a long hike one day, when he was surprised by the shriek of a bear cub.  Almost immediately, a mama grizzly charged at him.  He stood his ground, as you’re supposed to do, but the bear knocked him down.  He curled up in a fetal position and “played dead,” as the bear bit his calf, took a swipe at his side, then left.  The mama bear was displaying typical defensive behavior and moved on as soon as she realized Phil posed no threat to her or her cubs.  He stayed there for five minutes before hiking two hours to the road (because no cell phone service!), where he flagged down help and sought treatment at the nearest hospital in Fairbanks — 120 miles away!

He was so cool and calm while relaying the story that I figured it must’ve happened years ago, but no! — It was barely six weeks earlier, in June!  He showed us his battle scars, answered our questions, and remarkably, still exudes a genuine love for the Alaskan wilderness! 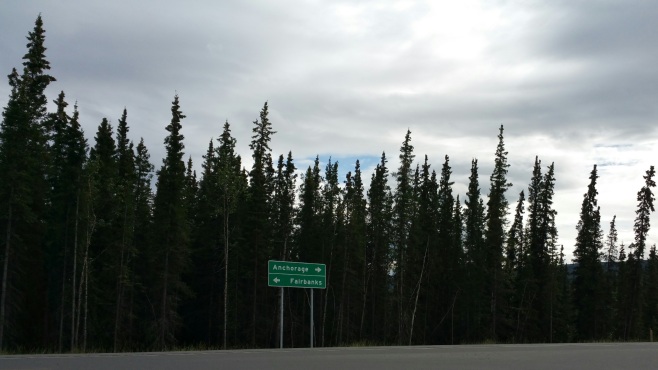 Phil’s bear encounter was still on my mind when I ventured out for a run during Liv’s nap… so I stayed near our lodge and tried to look as nonthreatening (and unappetizing!) as possible.

It was beautiful, and exhilarating, and I fell in love with Denali on that run (though I was crazy relieved when I learned our next lodge had a treadmill…). 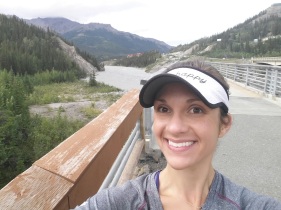 With a belly full of the most delicious (gluten-free!) pizza, we headed to the Husky Homestead, where puppies were thrust into our arms as we got off the bus.  Everyone was exploding with joy!  Because, PUPPIES!!!! 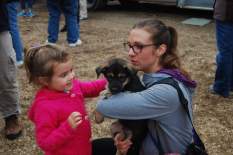 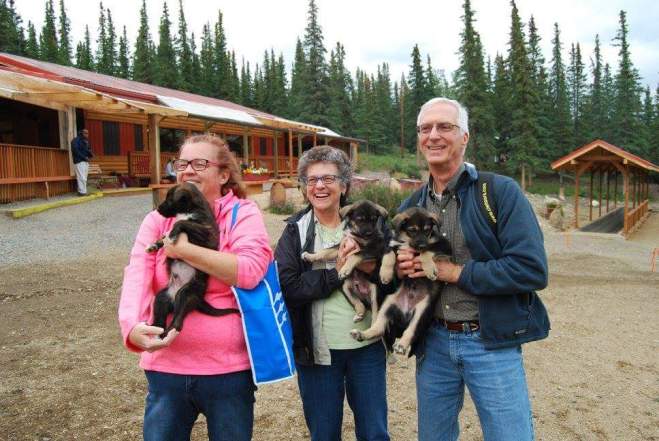 A staff member had Liv sit on a bench and handed her one of the smallest pups, named “Boo Radley” from To Kill A Mockingbird.  It was just the best ever!  And Liv still talks about her puppy, “Boo Waggley,” who “kept trying to kiss me!”

The next day, we boarded another bus from Denali to Mt. McKinley, where Liv snoozed in my lap with her new husky pup, “Puff-puff.”

It was raining when we arrived at our next lodge, (which was even more remote and rustic than the last one), but the drizzle was on and off enough that we managed to get out and explore. 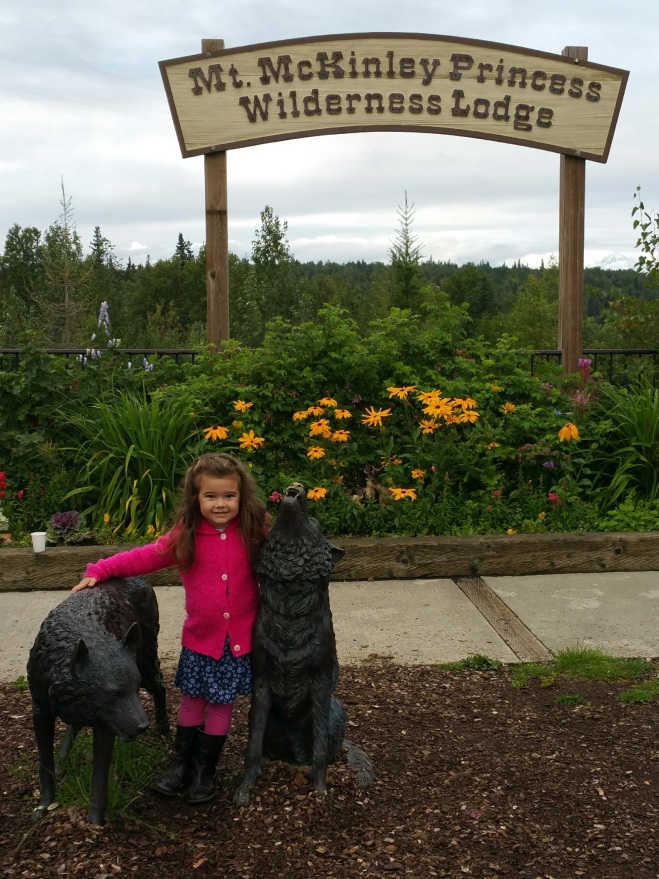 The best thing about rain?  Puddles!! 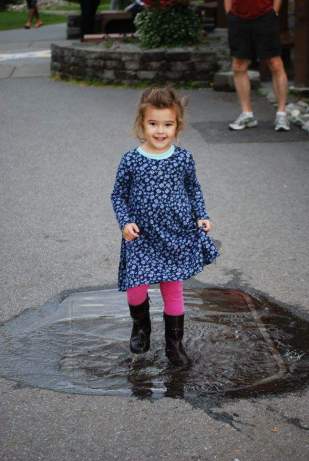 A couple of our favorite perks at Mt. McKinley were the cozy wood fires that were always burning in the main lodge, as well as the huge collection of puzzles and games we could borrow from the front desk.  We enjoyed several rounds of Chutes & Ladders, Princess Yahtzee, and Matching! 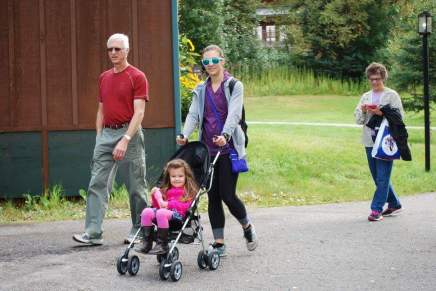 Despite the seemingly endless daylight, Liv was a rockstar sleeper on this trip — napping and sleeping in past 8:00 AM everyday! 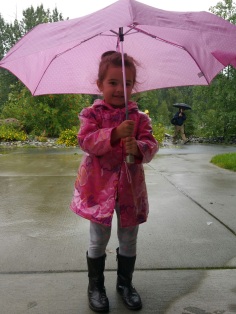 I, on the other hand, had a flare-up of neck pain, and wasn’t sleeping so well, BUT that’s why we travel with a licensed masseuse, ha!  My sis worked miracles on me and nearly cured the pain. 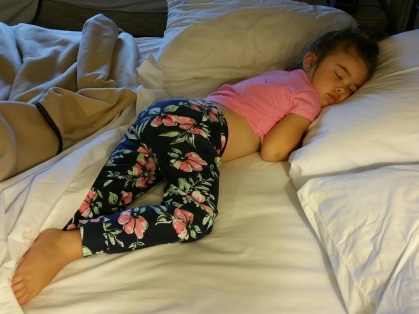 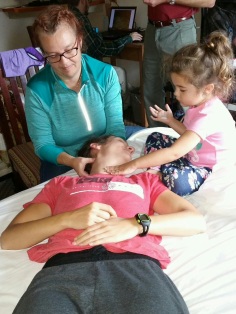 On our last day, the sun peaked out and clouds parted just enough for us to catch a rare glimpse of the mountain. 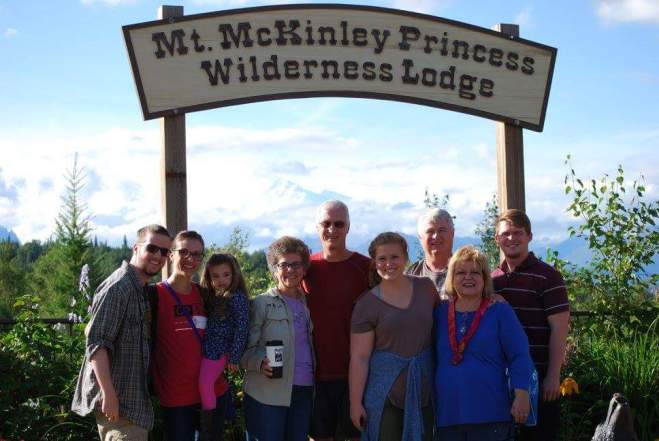 After a big family breakfast, we boarded another bus to Anchorage, where Liv was over-the-moon to find a playground next to our hotel, as well as an ice cream shop — with rainbow sprinkles, guys! 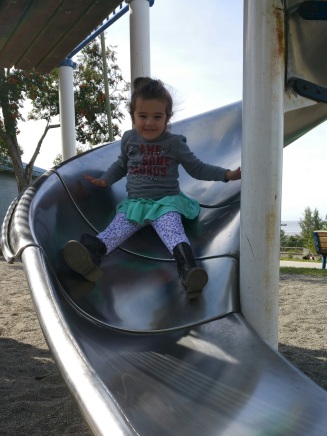 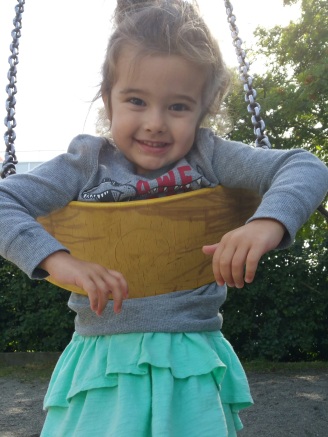 The end of vacation is always bittersweet.  As much as I love to travel, I’m also a homebody, so home (and Jared) were calling to me, and yet, this trip was awesome on top of awesome.  It’s amazing how well the 12 of us got along, enjoyed so much time together, and experienced so much.  But all good things must come to an end… and as Liv reminded me several times, she missed her toys…

Liv and I had the earliest departing flight, at 6:00 AM, but my parents and brother got up with us before the sun (which is hard to do in Alaska).  As we waved goodbye from the bus, Liv saw Memaw had tears in her eyes, and kept whispering: “Be brave, Memaw!  Be brave!”  The sweetest ever…

In 3.5 years, this was my first time traveling solo with Liv, but she’d spent the past two weeks falling asleep on my lap, so she kept it up, and slept through both flights!  During our layover in Portland, Liv got to play in the play area AND had her first ever happy meal.  (Not surprisingly, she liked the toy more than the food…) 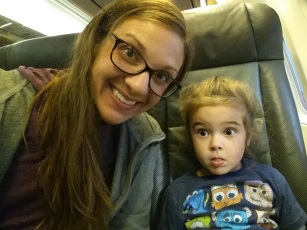 It’s hard (impossible?) to sum up a trip that’s so full of unforgettable, once-in-a-lifetime memories.  So I’ll wrap it up with one more enormous, heartfelt thank you to my mom and dad, who made it all happen.

And now I think we’re ready for Hawaii… Don’t you?!