At 13 weeks, Cookie was the size of “Nemo,” and by 14 weeks, has grown into a “Cinderella mouse!”  We’re also officially in the second trimester!  My little baby bump is getting more obvious, though I’m still disguising it under big, flowy shirts most of the time.

How I’m feeling?/What we’re up to?:  I’m lumping these together, because Week 13 was one of the worst weeks, with ongoing nausea, so many episodes of vomiting, poor sleep, and a migraine.  It was really rough…

So let’s just talk about how Jared completed his first Spartan Race on Sunday, 9/18!!

He ran close to five miles in between completing 20+ obstacles: spear throwing, scaling walls, ropes, and monkey bars, sprinting hills, crawling under barbed wire, through mud, and over fire — in the dessert, where it was over 100-degrees in the blazing afternoon sun! 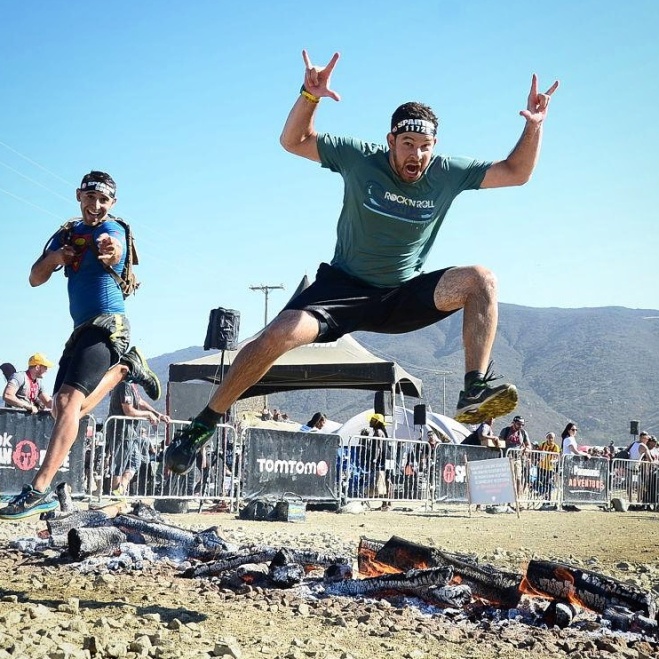 Initially, I was bummed Liv and I weren’t there to spectate, but after hearing about the conditions, nope!  I was not up for it… I’m overwhelmingly proud of him and would love to be at the next event (because I’m pretty sure there’ll be more)! 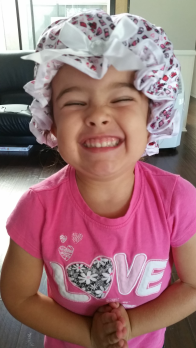 Tuesday, 9/20, would’ve been my niece, Jessica’s, 22nd birthday.  We wore purple in her honor and on the drive to school, we talked about how Jessica loved school and wanted to be a teacher, and now she’s in our hearts, still teaching us about love.

On Wednesday, 9/21, Liv and I went for our second prenatal appointment.  Jared would love to be at every appointment, like he was with “Bob,” but our work schedules, and the midwives’ limited availability have made it difficult to coordinate appointment times.  We missed him, but Liv was a hit with everyone in the office, waving to the receptionists, asking the nurse to weigh her, too, and even helping the midwife with the doppler monitor.  She got to squirt the gel on my belly and wave the wand around to find Baby Cookie’s heartbeat — the most miraculous little sound in the world… 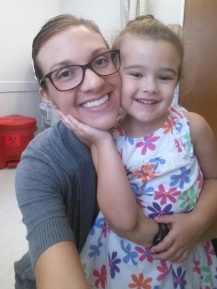 Thursday, 9/22, was the official start of fall, but it feels like summer and we still have an abundance of summer squash and zucchini, which means more zoodles!!  I love them, but I’m so looking forward to spiralizing some fall veggies, like butternut squash and sweet potatoes… c’mon, fall! 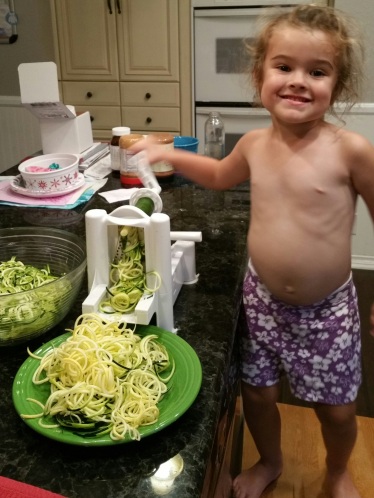 On Saturday, 9/24, Liv and I were up before 6AM for the AIDS Run San Diego.  I signed up just a few days before the race, mostly because I was afraid I wouldn’t be up for it, but Liv was pumped, so I took a gamble and committed. 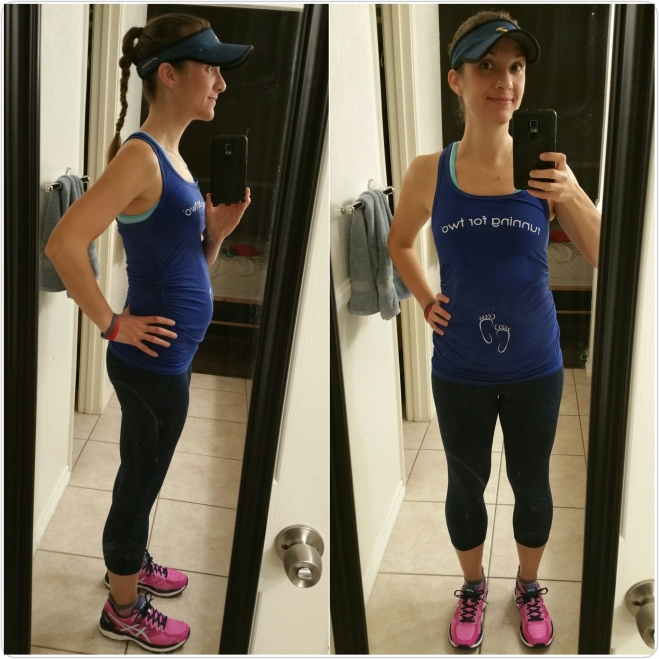 Jared had to work, but got up early to send us off.  After the 40-minute drive into the city, I had to jump out of the car to throw up as soon as we parked… Liv was a happy camper, though, so we loaded up the BOB stroller, and rushed off for the Start Line.

We picked up our race bib, found the porta-potties, and made it to the Start Line just in time for the horn to blow at 7:30 AM!

Running has been a struggle over the past seven weeks and I haven’t done a stroller run in months (Liv does not like to be confined!), so I wasn’t sure how the race would go… I started in the back of the pack and took it easy, thinking of all the angels and inspirers in my life, soaking up the excitement around me, chatting with Liv, and reminding her if she stayed in the stroller the whole time, she’d get a medal at the finish line, ha!

Liv was a riot — waving to all the spectators and volunteers, and constantly cheering for me: “Go, mommy, go!”  We were both ready to be done by Mile 3, but kept looking out for the Finish Line, which was a huge party despite it being such a small race!

When I passed my medal to Liv, a volunteer rushed over to put a second one around my neck: “For supermom,” she said.  It made my heart explode.  Physically, I haven’t felt good in so long… but this race was so good for me mentally and spiritually.

I was shocked we stayed under 10:00-minute-miles, which I’ve barely been able to do running on my own.  And it wasn’t til we got home that I realized I finished second in my age group — what?!!

Back home, our neighborhood garage sale was going on, and many of our neighbors were out, their driveways covered with books, clothes, and *gasp* toys!!  Our little Rainbow Princess emptied her piggy bank into her kitty-cat purse and went on a shopping spree, buying a Palace Pet, Busytown board game, jump-rope, monster doll, and (with mama’s coaxing) two books, all for a handful of coins, and a few hugs! 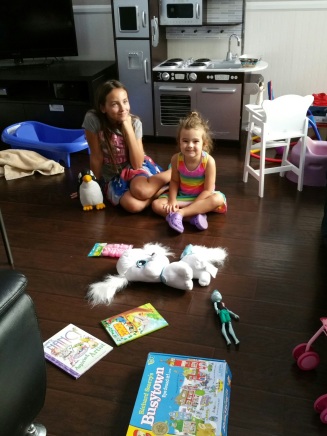 Sunday, 9/25, was my dad’s 60th birthday!!  I woke up craving pumpkin pie (my dad makes the best pies…), so Liv and I came up with our own “Pumpkin Oatmeal Chocolate Chip Muffins.”  I love cookbooks, but I’m not a recipe follower, so baking is always an adventure of throwing ingredients together to make something we hope turns out healthy(ish) and yummy.  These guys were a winner!  Here’s what came together… 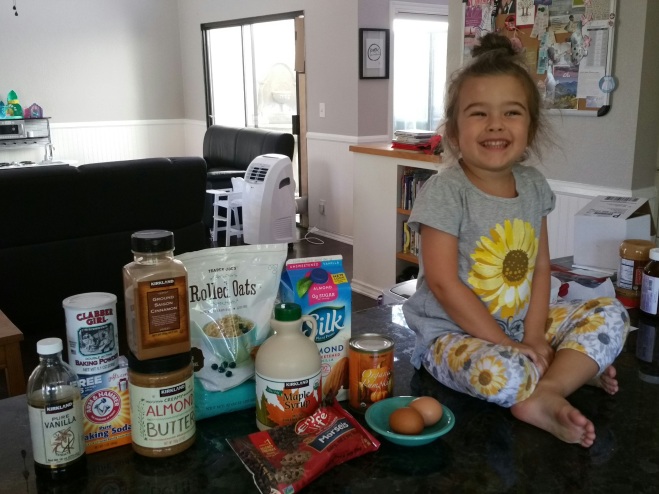 We threw everything in the food processor, starting with the wet ingredients.  Then we divided the batter into 12 foil cupcake liners, and added some more chocolate chips on top (and in our mouths)… 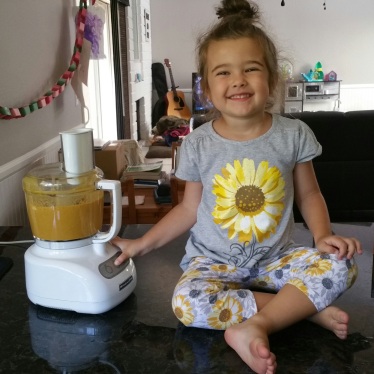 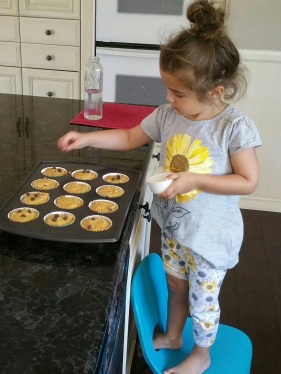 We baked them for 24 minutes at 350-degrees!  They turned out soft, but chewy, not too sweet or too pumpkin-y, and were best warm, while the chocolate chips were still melty. 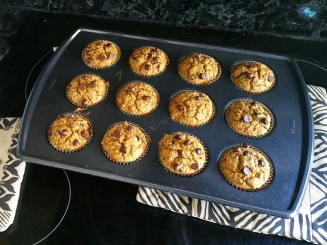 Since temps hit the 90s that day, and I already had the food processor out, we whipped up some strawberry banana smoothies to cool off while the muffins baked.  It felt like summer, but smelled like fall! 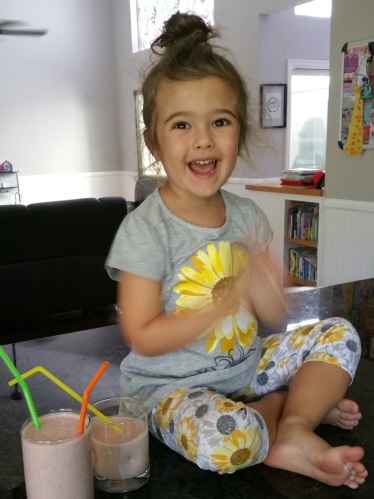 In between the muffin and smoothie making, there were board games, sticker parties, and video chats with the birthday dad/Pap and family back in Ohio, as well as the O’s in Virginia. 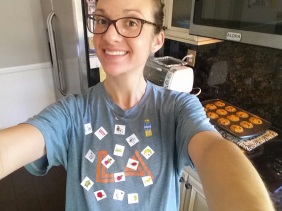 And what’s a fall Sunday without some football, couch snoozing, and snuggling?!

It’s still crazy hot here — it actually hit 100-degrees on Monday! — so we’re continuing to make smoothies and keeping our trips to the park extra short.  Have I said it yet?  C’mon, fall…! 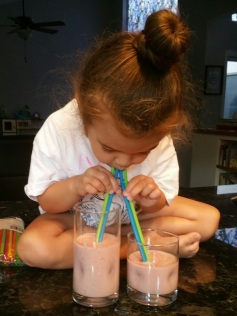 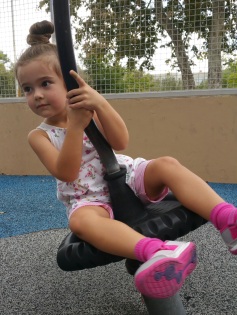 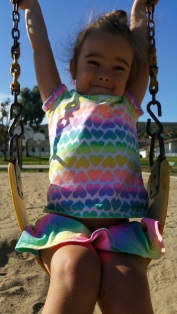 On Wednesday, 9/28, the Boston Athletic Association announced: “Those who ran 2 minutes, 9 seconds or faster than their age and gender qualifying times were accepted into next April’s race.”  While I did not submit an application for the 2017 Boston Marathon, (since it’s only 2.5 weeks after Cookie’s due date…), now I know, I would not have gotten accepted with my BQ of 3:33:22, just 1:38 under qualification.

I missed the cutoff by a mere 31 seconds, but I’m not bummed.  If anything, I’m even more motivated!  My friend, Sandy missed the cutoff, too, but said it best: “The fire is lit!”  In fact, I found out about the 2017 cutoff right before heading to the gym, and ended up having the best run I’ve had in eight weeks!  I’m already dreaming about BQ #2 after Baby #2!

Today’s bump vs. my BQ in February: 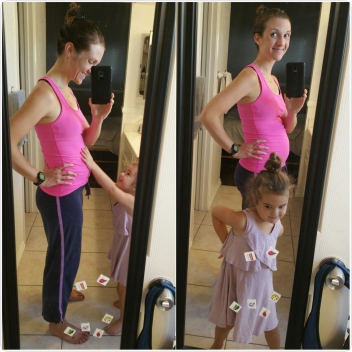 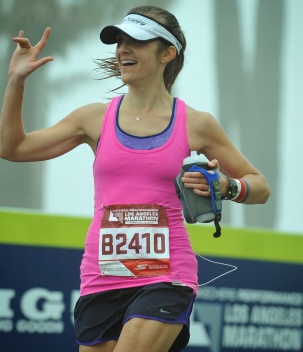